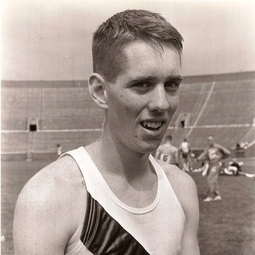 "I don't think he realized the natural talent he had until he started on the cross country and track teams," says his former cross country coach Lynn Krafve.

Marty went to Mankato State on a track scholarship and ran a range of events from the 4x440 to the 3,000 meter steeplechase. He became one of Mankato State's best runners and earned All American.

"He was a god. He was really impressive," says Bruce Johnson, who ran with him at MHS. "Marty was a super nice guy."

Marty participated in the ROTC Marine Corps program in college and graduated in 1967. He joined the Marines, was promoted to first lieutenant as a helicopter pilot in Vietnam and earned the Flying Cross and Air Medal.

On Feb. 5, 1970, he was seriously wounded by enemy ground fire while on a mission co-piloting a CH-46D helicopter. Despite serious injuries, he helped land the aircraft in an area clear of the enemy. Three weeks later on a naval hospital ship, he died. He was 24 years old.

The MHS Marty Benson Memorial Award was established in 1972 to commemorate his competitive spirit and athletic achievement. His name also is inscribed on the Vietnam Memorial in Washington D.C.