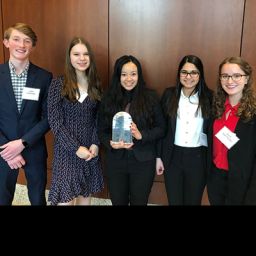 VANTAGE Students Win Big at St. Thomas Business Plan Competition
March 17, 2020
Share to FacebookShare to TwitterShare to Google+Share to LinkedInShare to PinterestShare to EmailPrint this page

On Friday, February 21, young entrepreneurs from around the Twin Cities presented their business plans to a panel of expert judges at the University of St. Thomas Business Plan Competition. Two teams of Minnetonka High School VANTAGE Global Business students competed and made big impressions on the judging panel, scoring high points.

Senior Lara Rahman and junior Ally Mattson took first place with their company, The Posh Pony, as well as a $10,000 prize. Coming in third place, and winning a $2,500 prize, were juniors Lauren Benoit, Ally Chan, and Cael Pfeffer with their company, Safe Stuffing.

To qualify for the competition, both teams had to first compete in the annual VANTAGE Global Business Shark Tank Competition in January. The top four teams from the Shark Tank event submitted their business plans to the St. Thomas judging panel who chose only five high school teams from around the Twin Cities to compete at the competition in February. In this final round, teams were judged on their presentations and how well they met the business plan criteria. Ultimately, the winners were decided on how likely the judges would be to invest in their company.

The Posh Pony, as the name might suggest, created a unique product especially for horses: an organic horse treat. Team member Lara Rahman found this product to be especially beneficial in her life outside of business. "I have been a competitive equestrian for 8 years and was struggling with finding a treat that would benefit my horse the most," she said. "So I decided instead of looking for something that doesn't exist, I made them myself."

Multiple factors contributed to the Posh Pony's success. "The treat's visual appeal, organic recipe, and ability to enhance a horse and equestrian bond are what make The Posh Pony treats unique and give it a competitive advantage," said Rahman's partner, Ally Mattson. But it was their ability to work together to persuade the judges that really made them stand out from other teams. "I think Lara and I's ability to present together put us over the edge. We were very enthusiastic and knew how to sell our product."

The idea for the product that Safe Stuffing designed sparked from a rather scary event. One team member, Lauren Benoit, had a fright last summer when her dog had to undergo emergency surgery due to an intestinal blockage caused by stuffing from a dog toy. The three team members decided to create a revolutionary product that would keep dogs safe from the hazards of ingesting toy stuffing. "We knew that this product would solve this problem that many dog owners face, especially because this type of product has never been manufactured before," said Chan.

Like the Posh Pony, Safe Stuffing had teamwork and passion for their products on their side. "I think our team was successful for multiple reasons," said Benoit. "Mainly, my teammates, Cael Pfeffer and Ally Chan, were amazing. They worked incredibly hard and were just as motivated and driven as me to win. Secondly our team was incredibly passionate about our business and all believed in our product, this allowed us to really work hard."

Presenting in front of a panel of judges was nothing unusual for Pfeffer and his team, but that's not to say that they didn't have a tough crowd to impress. "All the judges had extremely important jobs for their respected companies, which made me very nervous about sharing our idea for them," said Pfeffer. "Overall, I believe that the judges at St. Thomas offered tons of great feedback for our company, which can help us build our idea and make it stronger."

Likewise, members of the Posh Pony felt a lot of feelings going into the competition. "I was very excited to present our idea but also nervous because it is a very niche market," said Rahman. I was still looking forward to their professional opinions and I have stayed in touch with a few of them."

Despite the concerns, the months of hard work and preparation served the teams well. Their teachers, especially, were proud of all the effort they put into this competition. "It's so refreshing to see the work put in match the reward," said Kimberly Meehan, one of the VANTAGE Global Business teachers who co-headed the Shark Tank competition for Global Business this year.

As they look ahead, some of the teams hope to make their business plans reality.

"Our company has decided that we are going to try to take our business plan to the real world by actually trying to create a real business out of it," said Pfeffer. "We believe we have created a road map for our company to be successful. So watch out world, because Safe Stuffing is about to change the dog toy market forever."

Congratulations to Posh Pony and Safe Stuffing for all of their hard work and tremendous accomplishments! 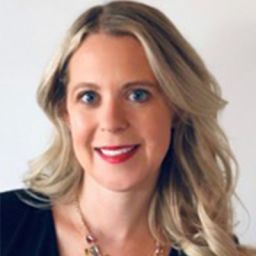 The Minnetonka Public Schools Foundation is pleased to announce the appointment of Lya Hurst as the organization's new Executive Director. 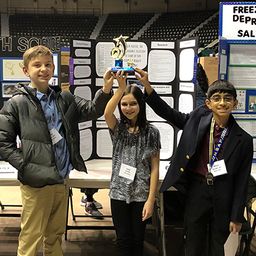 Sixth grade accelerated science students at MME and MMW participated in school and regional science fairs, several moving on to compete at state. 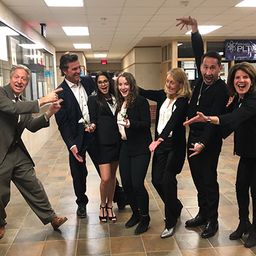 Students in the VANTAGE Global Business strand participated in the 7th annual Shark Tank. Teams had the unique opportunity to present original business plans for a product or service they designed in front of a panel of judges. 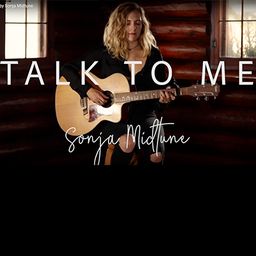 Alumn Sonja Midtune '07 releases new song, " Talk to Me" and reflects on how important music is for students. 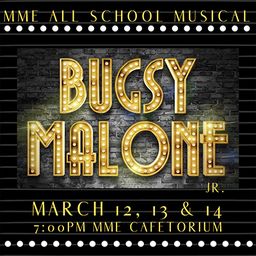